Could Use Some Prototype Info.

Discussion of specific prototype locomotives and other equipment of all gauges.
Post Reply
4 posts • Page 1 of 1

Could Use Some Prototype Info. 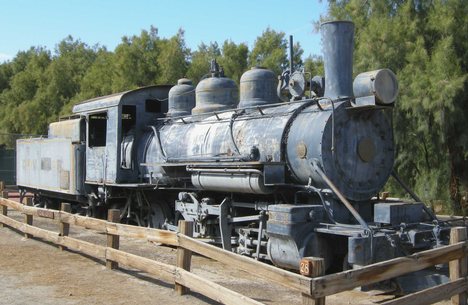 I'm considering making a model of this locomotive somehow and a set of Side Profiles/Drawings would be really helpful. Now somone has told me that the builder's number for the locomotive is 42864 and that it is Baldwin built. I'm pretty certian that the loco is a Baldwin but not sure about the builders number. If any of you have or know where I can find drawings for his engine I'd be very much obliged!

Also, the Morenci Southern has been a railroad I've had interest in, but I don't know much about it. I have seen a few photos of one of their 2-8-0s. An outside frame version and a rather nice looking engine I must say. I've also seen a photo online, forget where, but in the caption it said it was a Morenci Southern train, but the loco looked like a early "C-16". Did they have any locomotives like that on their roster? Just curious is all.

Again, I'd be much obliged for the help!
Top

No big surprises, but the best resources for the Morenci Southern and other Clifton/Morenci lines is David Myricks Railroads of Az vol III. Mallory Hope Ferrell did a history of the Coronado RR and other RRs in the 2004 Finescale Railroader. Both have excellent pics of the 2-8-0's. I dont have Myricks roster handy, but Phelps Dodge (the eventual owner of the Morenci Southern, Arizona Copper Co, Detroit Copper Co, Coronado rwy and Shannon Az (later)) did have at least one c-16 there. Almost all of these locomotives were shared with Phelps Dodges narrow gauge just south of the border, which was known as the Moctezuma Copper Co. The reason I point out all of these corporate names is that trying to track specific locomotives (in a generally nonpublic industrial setting) from one affiliate to another is almost impossible, especially since Phelps Dodge was notorious for being as secretive as possible.
Top

I got around to pulling the spec sheets for #1 and #2, they are now available in the image library:
http://www.pacificng.com/imglib/main.ph ... emId=17810

Each locomotive has a 2 page sheet and are sorted in folders for future expansion of Death Valley RR info. Looks like they were both "10-30E" in the Baldwin Class System. A "C-16" or "Class 60" to borrow D&RG terms, would have been a 10-24E in the Baldwin system I believe.
Andrew Brandon - PacificNG Webmaster
An End To Red Domes In Our Lifetime!
Top

I remember a couple of times looking at the locomotive and its tender and taking some measurements. The first time was more than 40 years ago while in high school and on a family vacation. Then some years later. Don't know where to find the notes.

One interesting thing is that the the driver axles are all at 48" o.c. Many of the older locomotives had spacing that was not this uniform.

The tender tank is a welded replacement done by US Potash. I think all three of the US Potash locomotives got new welded water cisterns.
Brian Norden
Top
Post Reply
4 posts • Page 1 of 1